Big Potato Rolling Stone: The Music Trivia Game Where Legends are Made 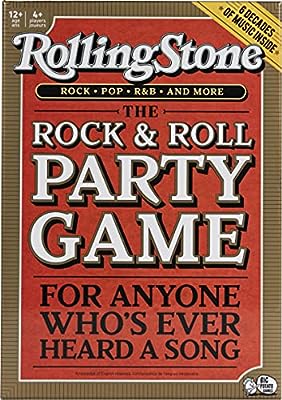 Price: $29.95
As of 2021-09-26 15:29:45 UTC (more info)
Product prices and availability are accurate as of 2021-09-26 15:29:45 UTC and are subject to change. Any price and availability information displayed on https://www.amazon.com/ at the time of purchase will apply to the purchase of this product.
Availability: In Stock
Add to Cart
Buy Now from Amazon
In stock. Usually ships within 2 to 3 days.
Product Information (more info)
CERTAIN CONTENT THAT APPEARS ON THIS SITE COMES FROM AMAZON SERVICES LLC. THIS CONTENT IS PROVIDED 'AS IS' AND IS SUBJECT TO CHANGE OR REMOVAL AT ANY TIME.

HEY HO, LET'S GO: in this party game two Superstar teams to go head-to-head and power slide their way into a rock’n’roll showdown. ANYONE CAN PLAY: this is a music board game for anyone who's ever heard a song, so you won’t have to be a music buff to get involved. THE TIME IT IS A’TICKING: To start, two players face off in a quick-fire category battle. Afterwards, you’ll have 30 seconds to describe, sing and hum three famous bands for your team. FROM BEATLES TO BON IVER: this game contains over 150 well-known artists from the 1960's to the 2010's, so there's something for everyone. FOR THOSE ABOUT TO PLAY, WE SALUTE YOU: This is a board game for adults and family alike - a perfect new addition to game night. Requires a minimum of 4 players. Requires 2 x AAA batteries (not included).